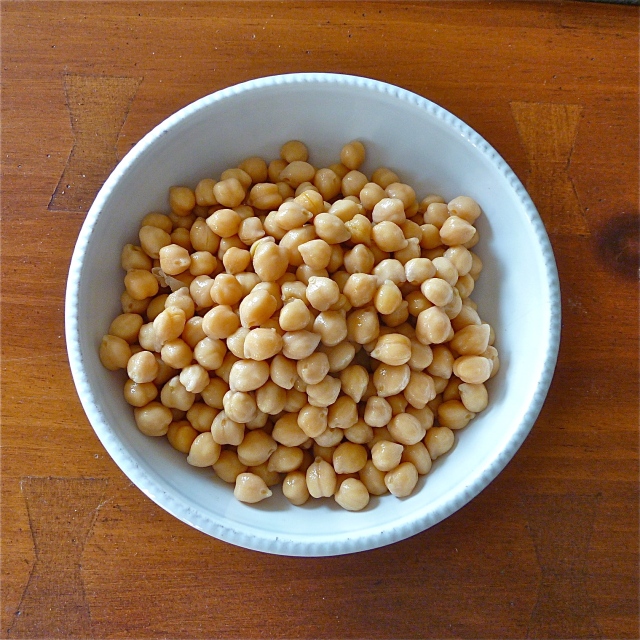 Slow soak + slow cook + slow cooling off yields the best results in cooking chickpeas from a dried form. Just consider that this is a trip to the spa for little beans, to bring out the best in them. Just like how it works for us.

First off, you don’t HAVE to pre-soak dried chickpeas, but I typically do since it’s so easy. As long as I actually remember to do it…

But there are a few advantages to consider on this pre-soak step if you’re on the fence:

So before going to bed at night, I pour 1 cup of dried chickpeas onto a baking sheet and pick out any damaged ones, stones and other grit I don’t plan to ever knowingly put in my stomach. I pour them into a strainer and rinse pretty thoroughly.

Then I put them in a heavy pot such as a Le Creuset, cover them with 2 inches of water, cover the pot, and go to bed.

Alternately you can bring the pot of water to a boil, boil for about 2 minutes, remove from the heat, cover, and let sit for 4 hours. The beans will be ready for the next step. But the longer they soak, the shorter the cooking time.

Step 2: Get ready to cook the chickpeas.

The following morning, drain the water from the beans and refill the pot with 8 cups of water, or at least twice the depth of the beans. This is to make sure you don’t run dry. I’ve done this, and it’s not pretty.

Note: If you didn’t do an overnight soak, double the water to allow for the beans absorbing a bunch of it. I know it seems like a lot, but trust me, this is the way to go. Better safe than sorry.

Next, add some complementing veggies to the pot to add a little added flavor to the beans. I add half of a peeled yellow onion, a large peeled, smashed garlic clove, and a whole dried pepper (my favorite is smoky chipotle). Surprisingly the dried pepper doesn’t add any spiciness, just a little more flavor and in the case of the dried smoky chipotle, a little smokiness. Feel free to add what you most like in flavoring – it could be black peppercorns and a bay leaf. But note, I don’t cut things up too small or use herbs like fresh thyme that will fall apart as I want to be able to easily remove them when the beans are done. If you want to add some herbs, just enclosed them in some cheesecloth and add the bundle. That way you can easily remove the herbs at the end.

Step 3: Simmer the chickpeas until tender.

Bring the water to a boil, reduce to a simmer, and cook until the beans are tender. Timing generally varies with the age of the chickpeas, but with a pre-soak it typically takes me about 1 ¼ to 1 ½  hours. If you skipped the soak, they’ll need 4 hours of cooking, maybe longer.

1)    Once the beans come to a boil, cover and place in a 350° F oven. I’ve done stews like this too as it promotes a more even cooking. The cooking time should be about the same.

2)    Use a slow cooker. I confess I haven’t done this, but it’s intriguing as they can cook all day while you’re at work and be done when you  get home. But as there’s a lot of variability between slow cookers, I’d want to test drive it during the day first while I’m home, to verify the best setting, and see how fast they cook with my model.

3)    I know some who use a pressure cooker, but I haven’t ventured there yet. For sure, it will dramatically shorten the cooking time when in a rush!

When the chickpeas are done, turn the stove off. Stir in a teaspoon of salt (unless, of course you live on the edge and added it in the beginning), keep the pot covered, and allow the chickpeas to completely cool in the water. This last soak in the hot tub adds a surprising amount to both the flavor and texture.

Once cooled, whatever you don’t think you’ll use quickly – just throw in a freezer-safe container and freeze. It’s great having some of these in the freezer as they thaw quickly and can be used for a quick, healthy week-night dinner. I don’t typically keep cooked chickpeas in the refrigerator for longer than 4 days.