Posted on November 3, 2011 by The Wimpy Vegetarian

For the next month, since the holidays (unbelievably) are upon us, I’ll be adding some easy (and not-so-easy-but-worth-it) recipes for gifts from the kitchen. There are few things more personal than receiving a gift that was painstakingly created by someone in their kitchen. It could be something they created themselves, or be a treasured recipe that’s been in the family for 3 generations – either way, it connects people in a very special way. Gifts from the kitchen are great in any season, but I particularly love to make food gifts for the holidays.

A bonus: it’s a wonderful thing to do with your kids, your grandkids, your nieces/nephews or just some kids you know in your neighborhood. It’s a great way to engage children on where our food comes from and remind them that some of the best gifts actually aren’t bought over the internet or at the mall.  And, as a bonus, it makes the child a part of the gift experience; I can guarantee they’ll be excited to be able to say they helped too! (The Shake and Bake commercial from the 60’s where the little girls in the ad say “And we helped!!” is emblazoned on my memory.)

But before I go any further, I should do a shout-out to my husband that this does not mean I want a jar of pickles you made for me for Christmas this year. Not unless there are earrings in that pickle jar.  🙂 OK. ‘Nuff said.

I’ll start this Gifts From The Kitchen series with a nice and easy recipe for an infused olive oil. It’s so easy to infuse olive oils, and they make for such a nice gift any time of year – as a great hostess gift, for example. Infused oils you’ve made in your own kitchen have a freshness to them, and you have ultimate control for how much flavor you want to infuse. Rosemary olive oil is one of the easiest, I think, although I’ve done basil, garlic and hot pepper with great success too.

Keep in mind that the container is part of the gift, so look around for some pretty jars: Cost Plus, The Container Store, Crate and Barrel, Michael’s Arts and Crafts, and Sur La Table are all good places to look.

A nice touch is to tie some ribbon or cord around the jar, laced through a card with an easy recipe on it like the Smashed Potatoes (recipe below). 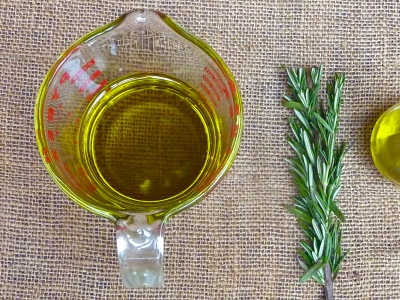 All set to go!

About The Wimpy Vegetarian

I'm a mostly vegetarian married to a Carnivorous Maximus and always looking for a simpler way to make a great dinner for both of us!
View all posts by The Wimpy Vegetarian →
This entry was posted in GIFTS FROM THE KITCHEN, Potatoes, Side Dishes and tagged comfort food, gifts from the kitchen, Infusing olive oils. Bookmark the permalink.